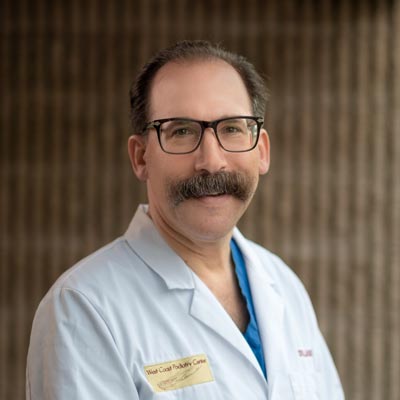 “How did you ever get interested in feet,” I am often asked. This is generally followed by “aren’t there more interesting body parts to study?”

I actually thought I was going to be a veterinarian as I was growing up. In high school, I took a class in Anthropology, and it interested me enough to major in Anthropology in college. What I took away is that of all the parts of the body, it is actually the foot that is most uniquely human. No other animal, not even the other apes have a foot like ours, perfectly adapted to walk on two legs. The foot has allowed us to walk upright and free our hands for creativity.

As a Pennsylvania native, I ended up going to Temple University for podiatry school and stayed there to do my residency at The Graduate Hospital of the University of Pennsylvania. It was there that I met and married my wife, Renae, who was an operating room nurse. Dating between residents and nurses was kind of frowned upon, so nobody knew about us until we got engaged! (In the operating room, but that’s a story for another time).

After residency, we moved out to Ohio to join a busy surgical practice, but after three relatively harsh winters, I realized I needed a warmer climate. My family had been vacationing in Sarasota for as long as I can remember. In fact, I have a picture of me when I was three years old in Sarasota Jungle Gardens.

25 years later, practicing in Sarasota, Renae and I have raised two fantastic boys, Spencer and Max, and along the way several cats, a dog, two chinchillas, and a ferret, not to mention the hermit crabs and goldfish.

When I’m not in the office or on-call, we love traveling to see the boys in Orlando. I’m convinced that I still love all the theme parks more than my kids do.

So much new technology and treatment options are available within the field of podiatry, and with this, along with good old-fashioned “country doctor” caring that I learned during my time in rural Ohio, I believe we are the best hands in Sarasota to care for your feet.

To experience our 5-star-rated podiatry care, schedule your Comprehensive New Patient Assessment today by calling 941-753-9599 to reach our Bradenton office or 941-366-2627 to reach our Sarasota office. You may also click here to use our convenient online request form. Your appointment includes:

We will take the time to explore your unique needs and answer your questions prior to recommending the next steps. We always provide a straightforward plan with a consultative approach to help you feel comfortable and ready to proceed with treatment.

As one of the premier podiatry practices in Bradenton & Sarasota, FL, our podiatrists and team at West Coast Podiatry Center also provide 5-star podiatry care to patients from Venice, FL & the surrounding areas.